WHY DID FRIDA KAHLO BECOME AN ICON?

My introduction to Frida came through an arts lecture given by a Kahlo authority whose name I no longer recall. I was writing for an indie newspaper in a California college town and that was my feature assignment for the week. The lecture included a slide show of Kahlo’s works. Needless to say I was intrigued, mesmerized—at times startled—by her work. I loved the colors, her style, the woman (Frida) as center of the universe. Two words described her—No fear. 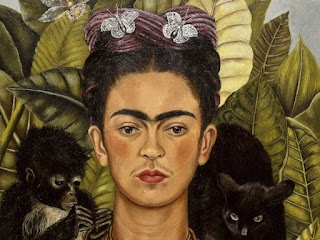 And then there was the Mexico connection: Her flamboyant, indigenous clothing, her raven hair parted in the middle, either pulled back in a tight bun or gloriously wild, the artsy jewelry. She appealed to me in all her gutsy wonder. I was not alone. She appealed to everyone, though long had she lived in her husband and mentor’s shadow. By the 1970s, Frida was breaking out and breaking the mold. She was becoming, dare I say it, as popular as her famous husband, painter, muralist and revolutionary, Diego Rivera. 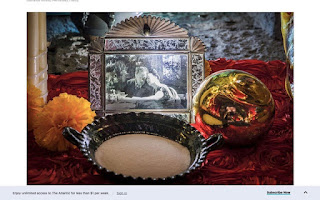 Frida became an icon because the world was finally ready for her. A strong woman who stood equally alongside an alpha male, years his junior, but as powerful in her way as he was in his. Rivera had prompted her, mentored her to continue to paint. A star was born. Did she overshadow her husband? Who can determine which painter held more power? That so many Kahlo paintings were self-portraits, that in itself was a symbol of a different spirit. She had been through hell and back (maybe Never back) beginning with suffering through polio and at eighteen, being hideously injured in a trolley accident in Mexico City. She wore a metal body brace her entire life. Her poor tortured frame would not allow her fractured body to push out a baby. And each time she became pregnant, not only did she lose the baby but her body suffered immeasurably due to the added pressure on her lower torso. But that didn’t stop her from portraying her suffering in her artwork, for all the world to see. In a way, suffering was the gateway to her art. 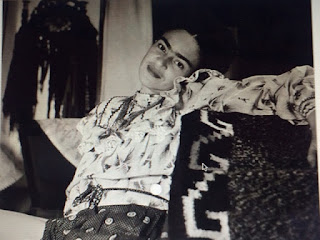 Though she never carried a child full term, as an artist – she pressed on. Years later, when I owned my bookstore in Puerto Morelos, Mexico, her paintings hung front and center on the walls. My favorite was Frida in the jungle with the monkeys. Love you, Frida. You have been an icon for decades – why? Not only because of your immense artistic talent, but also because of your staunch independence, your genius, your anarchistic politics, your free spirit, your shock value, and your bravery. And because you resonated with a spirit that became a universal spirit. Thank you for the beauty and the pain you portrayed and were not afraid to share. We love you Frida. 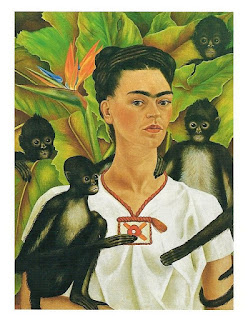 Posted by Jeanine Kitchel at 6:13 AM