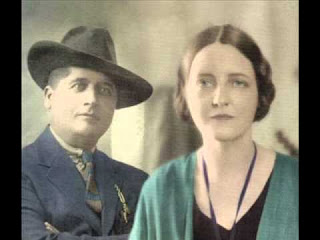 Felipe Carrillo Puerto, Yucatan’s progressive governor of the Yucatan, and San Francisco journalist Alma Reed are two names forever linked to Yucatan history.  Their romance fueled pages in newspapers on both sides of the border, but the unlikely outcome of their very public romance enlisted all the elements of Greek tragedy.

Reed was born in San Francisco and became one of the city’s first women reporters.  An advocate for the poor, Reed assisted a Mexican family in commuting the death sentence of their 17-yer old son in 1921.  The story was picked up by the Mexican press and due to heightened publicity, Mexico President Alvero Obregon invited Reed to visit his country.

As a stringer correspondent, she reported for The New York Times and was sent to meet Edward Thompson, the leading archeologist excavating Chichen Itza.  During the visit, Reed met Felipe Carrillo Puerto, dynamic governor of the State of Yucatan.

Carrillo had commissioned a road to be built from Merida to Chichen Itza, opening the budding archeological site to both tourists and scientists.  To commemorate the event, he’d organized a welcome ceremony inviting North American journalists and archeologists.

At the ruins, Reed interviewed the famed Thompson who had gone to Yucatan specifically to excavate Chichen Itza. Thompson took a liking to Reed and divulged he had in fact dredged Chichen Itza’s sacred cenote, garnering gold and jade jewelry and ornaments he’d taken from the sacrificial victims. Astonished by the enormity of Thompson’s admission, like the true-born paparrizis she was, Reed asked Thompson to sign a confession, which he did.

After Chichen Itza, the assembled entourage went on to Uxmal.  During this leg of the journey Reed and Carrillo got acquainted.  Reed was fascinated with the charismatic Carrillo who had been called both a Bolshevik and a Marxist for his sweeping reforms.

In her interview with the governor, Carrillo explained Yucatan had been inhabited by a handful of powerful families dating back to 1542 when Merida was founded. These wealthy landowners were basically slave masters, and notorious for their cruel treatment of the Maya.

REVOLUTIONARY IN THE MAKING

In 1910 Carrillo had fought alongside Emiliano Zapata in Central Mexico. From their association he took Zapata’s battle cry, Tierra y Liberdad, (land and liberty) for his own.  Back in Yucatan, Carrillo claimed part Maya, part Creole heritage and began his reforms by setting up feminist leagues in Merida that legalized birth control and the first family planning clinics in the western hemisphere. As governor he seized uncultivated land from powerful hacendados and distributed it to the Maya, stating it was their birthright. He built schools. He reformed the prison system.

No small wonder Reed named him the Abraham Lincoln of Mexico.  As a liberal she agreed with his reforms. And besides that, she was smitten.  But as a divorceé and Catholic, she tried to ignore the feelings she was developing for the married father of four.  She left for the US, vowing never to return, hoping to severe ties in what was becoming amor calido (romance of the steam).

Two months later, however, The New York Times sent her packing back to Mexico to cover the archeology scandal that involved Edward Thompson and the Chichen Itza cenote.  She had a job to do.

On her second round in Mexico, both Reed and Carrillo’s feelings couldn’t be ignored.  In the ultimate taboo, Carrillo divorced his wife to become engaged to Reed.  He even had a romantic love song composed for her, still popular today, La Peregrina (The Pilgrim).

It seemed a match made in heaven.  The two idealists prepared for their wedding that would take place in San Francisco.  Reed hastened back to the U.S. to make arrangements before her permanent move to Mexico.

Shortly after her departure to the US, however, another revolution seemed imminent.  Fighting had broken out in the Yucatan, and henequen planters and hacendados were trying to overthrow Carrillo.  President Obregon’s right hand man, de la Huerta, was opposing him and because Carrillo backed Obregon, he was at risk.  Carrillo was forced to find guns to fight both the planters and de la Huerta’s forces.  And to make matters worse, he now had a $250,000 reward on his head.

To secure the guns and ammunition they would need to do battle, Carrillo went by night to the Progreso coast with three brothers and six friends as guards.  Just as they waded out to the launch that would take them to New Orleans where they’d acquire firearms for their revolution, a Navy captain signaled to soldiers lying in wait on shore.  The soldiers rowed out and captured Carrillo who told his small group not to fight, but to go peacefully.

De la Huerta’s forces took them back to Merida, jailed them for the night and planned an arraignment in the morning.  Carrillo refused to make a plea. He was, after all, governor of the state, and refused to recognize a kangaroo court.  He was condemned on Janurary 3, 1924, and taken to Merida Cemetery where he, his brothers and friends were lined up against the wall to await the firing squad.  The first round of volleys was sent over their heads; the soldiers didn’t want to kill them, so fiercely local were the Yucatecans to Carrillo.

The commander shouted that those soldiers were to be shot, and over the dead bodies of the first soldiers, Carrillo, brothers and friends were executed as they stood with their backs against the cemetery wall.

In San Francisco, Alma Reed had been alerted that trouble was at hand. She heard the news shortly afterwards that Carrillo had died in the Yucatan, a martyr’s death,  at 49.

Reed insisted on returning to Merida to see the spot where Carrillo fell.  She stayed but briefly in the Yucatan, and on arriving back to New York, was sent on an assignment to Carthage to explore ancient ruins.  She would never re-marry. Her reporting life eventually took her back to Mexico where she helped establish the artist José Clemente Orozco.

One of Reed’s fears was that President Obregon had a hand in killing Carrillo.  He had, after all, assassinated Zapata after luring him to a truce meeting along with Pancho Villa.  Reed thought Carrillo’s radicalism may have aroused opposition from the Mexican president, but she could never prove the link.

The pueblo of Chan Santa Cruz, south of Tulum, changed its name to honor the Yucatan governor, and now goes by the name Felipe Carrillo Puerto.  Alma Reed died in Mexico City, November, 1966, while undergoing surgery.  She was 77.

Jeanine Kitchel is the author of Where the Sky is Born: Living in the Land of the Maya, and the upcoming nonfiction book, Maya 2012 Revealed, Demystifying the Prophecy, and coming in April: Wheels Up—A Novel of Drugs, Cartels and Survival.  Contact the author through her website, www.jeaninekitchel.com.
Posted by Jeanine Kitchel at 11:57 AM