Stephens and Catherwood Take the Maya World: Review of Jungle of Stone

IN 1839 an energetic American writer and a talented British artist, adventurers to the core, braved the jungles of Yucatan, Guatemala and Honduras and became the first English speaking travelers to explore this region originally known only as Maya.

Though a lawyer by profession, John Lloyd Stephens fell hard for archeology after a two-year sabbatical took him to Europe and the Mediterranean in the mid-1830s.  After trekking through deserts and ancient pyramid sites he came away fueled with a desire for more of the same. Simultaneously he discovered he could write and was dubbed “the American traveler” after he penned his first best seller about Egypt’s pyramids, the Nile, Petra and the Holy Land.

British artist Frederick Catherwood gained his footing during the “Egyptomania”
craze that hit London in the 1820s. A bit older than Stephens, he reached Egypt and the Nile in 1823 and discovered he had an uncanny ability to portray ancient monuments and archeological digs with great accuracy. Egypt was the start of an odyssey that in the end would take him to Copán and Palenque, Uxmal, Labna, Chichén Itzá and beyond.

Serendipity brought the adventurers together in London, and shortly afterwards.
Stephens received a special ambassadorship to Central America from President Martin Van Buren to negotiate treaties with several Latin America countries.
Stephens immediately contacted Catherwood and asked him to come along for the ride. After political issues were settled, they’d go exploring for ancient ruins.

The duo headed south and after an intense journey through war torn Guatemala and Honduras, Stephens finished what he could of his diplomatic workload. It was time for exploration with their first destination Copán. Spurred on by a letter written to the Spanish king about ancient sites with large stone structures from an explorer named Deigo Garcia de Palacio three hundred years earlier, Stephens and Catherwood followed the trail of Central American patriot Colonel Juan Galindo. Galindo had discovered the archived letter and traveled to both Palenque and Copán in 1834. Stephens and Catherwood would arrive five years later after pouring over sketchy site coordinates from Galindo’s report made to higher-ups.

Galindo believed whoever built these stone monuments had been an advanced civilization, and the artisans who created the works did so without iron tools. The monuments were covered in hieroglyphics and he conceived it was phonetic writing, which proved accurate, though it would take more than a hundred years to confirm his theory. He believed the site was the seat of a great power, a large population and a people advanced in the arts. The site had a grand plaza that could compete with the coloseum of Rome, he said. He emphasized that local inhabitants had little knowledge of the site’s history. And unbelievably, the account that pushed Galindo to explore Copán had accumulated dust in the archives of a Spanish court for more than three centuries. This mysterious and intriguing report was the reason Stephens and Catherwood found themselves in the depths of a Honduran jungle.

Because terrain in southern Mexico, western Guatemala and Honduras is a thick tangle of vegetation filled with rain forests and swamps, parts of the land were a mystery even to the Maya who lived there. Locals had no explanation for the stone blocks and imposing structures and knew nothing of their creators. So dense was the jungle that Spanish conquistador Hernán Cortés passed within one hundred miles of Palenque in the early 1500s, never learning how near he was to a massive pyramid site. (The classic Maya collapse occurred around 900 AD).

WHERE DID THEY COME FROM?

Galindo’s revolutionary view of an ancient sophisticated civilization with no ties to their Northern European brethren fell on deaf ears. Early explorers of Palenque in 1787 insisted it had classical Roman and Greek influences, speculating somehow one of these cultures had crossed the Atlantic, conquered the native locals, built the structures, never to be seen again. Another explorer said it had to be the work of the Lost Tribe of Israel’s doing, underscoring how hesitant each and every western explorer who came in contact with the Maya was to give an advanced indigenous culture its due.

These discoveries continued to baffle western intellects and religious scholars alike. The existence of vast sophisticated cities hidden in the middle of Central American jungles threatened the biblical order of the known world. Where did these people come from and how old were their cities? One explorer, a crazy outlier named “Count” Jean-Frederic Maximilien de Waldeck, made an accidentally correct claim when he stated Uxmal was at least one thousand years old, basing his claim on the concentric tree circles he counted from a tree that implanted itself in the building’s entryway after it was already in ruins.

It would take Stephens and Catherwood, seasoned with their old world explorations, to examine the evidence at the sites and forge a new, correct narrative.

Though Stephens’ written descriptions of the sites were detailed and informative, it was Catherwood’s otherworldly sketches that would forever change the way the world viewed the mysterious, previously unknown Maya culture. On their first week at Copán, Catherwood would toss out countless attempts at capturing the Maya stelae (stones with hieroglyphs) that he found. At first his western mind could simply not contemplate, then draw, what he was seeing. To him, a western European, the gigantic Copán sculptures, some four to five meters high, were so profoundly different than the antiquities of the mideast that he had a difficult time rendering them. The two veteran travelers who had toured the wonders of Egypt knew they were in the cross hairs of an incredibly advanced civilization and they were now on “new ground” as Stephens wrote later in Incidents of Travel in Central America, Chiapas and Yucatán, his best seller about the Maya world.

To capture the soul of the sculptures and to assist himself in so doing, Catherwood took photos with his Camera Lucida, the precursor to a modern camera, then from those drawings, he attempted to re-draw what he saw.  Though it took him many tries, a slight shift in his perspective broke through and with powerful persistence, he finally got it right. He filled page after page with drawings rich in detail of the unfathomable hieroglyphics, monuments, sculptings. His drawings would prove so accurate that long into the future, archeologists would be able to read them when they finally broke the Maya code in 1976 at the famous Palenque Round Table.

But at the time, to convince an uncertain world of what they were seeing, it would take not only the stark beauty of Catherwood’s detailed drawings to put Copán, Palenque and other Maya sites on the map, it would also take Stephens’ energetic and romantic prose to seal the deal.

Copán and Palenque were just the beginning of Stephens and Catherwood’s Maya explorations. They would go on to view forty-four sites in all, many detailed in Jungle of Stone. The struggles they endured to bring this discovery to the world hit them hard. Both were forever plagued by side effects of malaria and other diseases contracted while chasing pyramids.

Even if you’re not in the mood for a long read, Frederick Catherwood’s incredible sketches shown in the book, many in color, make Jungle of Stone worthwhile. It’s available at Alma Libre Bookstore in Puerto Morelos, 360 pesos. 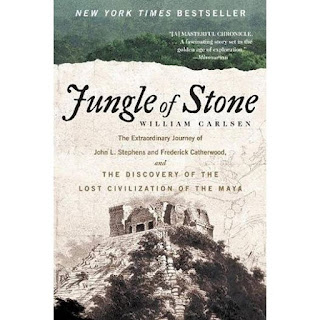 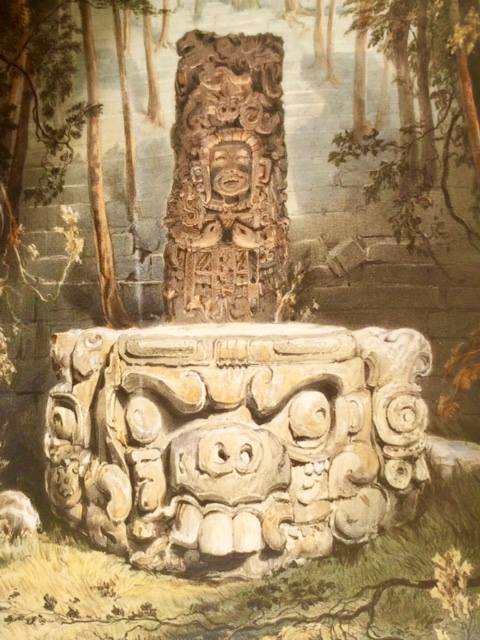 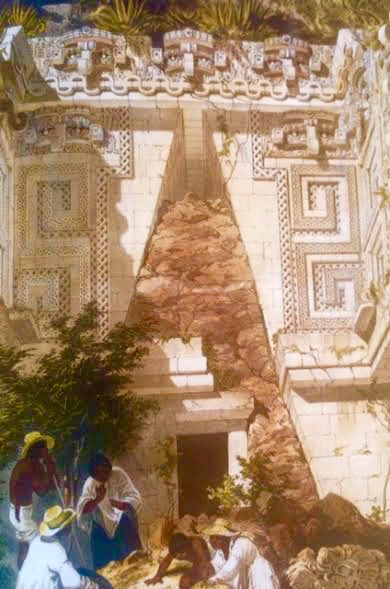 Posted by Jeanine Kitchel at 10:43 AM