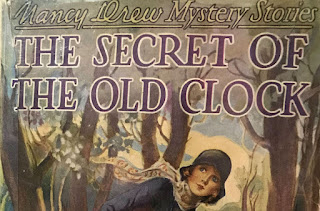 (Photo from Jennifer Fisher, founder of Nancy Drew Society, of The Secret of the Old Clock).

Who of us girls, as young teens, did not love Nancy Drew? The sleuth with a voracious appetite for getting into scary trouble, being at the center of crime scenes and mysteries? Who taught us how to signal SOS with a tube of lipstick, break out of a window using spike heels, and to always keep an overnight bag in the car, just in case?

For years I thought Carolyn Keene was Nancy's author but later discovered that was a pen name for Mildred Wirt Benson who would write 135 books and 23 of the first Nancy Drew detective tales that came to shape Nancy's "steely bravery" according to an article by Jennifer Fisher in Zócalo. Benson's image of Nancy would create "the tenacious, bold and independent heroine we have come to know." The real author of our favorite "girl" detective was an Iowa homegrown born in 1905, daughter of a country doctor, and the first student—male or female— to earn a masters degree in journalism from University of Iowa (later home to the Iowa Writers Workshop). For fifty years Benson worked in journalism when not penning famous mysteries, covering the courthouse beat and crime and corruption at The Toledo Blade and The Toledo Times.

As a child Benson was an avid reader of children's classics. Her first short story, "The Courtesy," appeared in St. Nicholas, a children's magazine, and won her second place in a monthly contest. Finding Iowa too dull for a woman with an agenda, she ventured to NYC and landed a job with an icon in publishing, Edward Stratemeyer. Fortune Magazine said of Stratemeyer in 1934, "As oil and gas has its Rockefeller, literature has its Stratemeyer."
Stratemeyer published The Bobbsey Twins and The Hardy Boys and famously hired ghost writers for a flat monthly fee. Benson's pen name remained a mystery until the 1970s when researchers discovered Benson was the Oz behind the curtain. During the Great Depression and WWII, parents were candid with their children, according to Fisher's article, and didn't hide life's gravities. Enter Nancy Drew, a new kind of heroine for a new age of young girls. Stratemeyer penned a three-page outline for Benson and depicted her as an "up-to-date American girl at her best—bright, clever, resourceful, and full of energy."

TREATED AS AN EQUAL

In 1973, Benson wrote an essay about her famous heroine, stating Nancy was treated as an equal by her father and by many in law enforcement and she never gave up when the going got tough. Her spirit struck a chord. Nancy Drew personified "the dream image which exists within most teenagers," Benson said. According to Fisher's article, this 1930s teen remained culturally relevant for more than 80 years, even as young women's roles changed dramatically. Mothers and grandmothers passed the books down to their daughters. "Women still tell me how they identified with Nancy Drew and that Nancy Drew gave them confidence to be whatever they wanted to be," Benson told an interviewer in 1999.

But Benson, perhaps, was her own best role model for the very Nancy Drew we all came to love. She trained as a pilot in the 1960s. Traveling solo, she flew down to Guatemala to view ancient Maya pyramid sites. She traipsed through crocodile-infested rivers and hacked her way through jungles with a machete. In a particularly harrowing very Nancy Drew like experience, she was even locked inside a room in Guatemala by locals who thought she knew too much about criminal activity in their town. Channeling Nancy, she overpowered one of her captors and escaped. "Like any good sleuth," Fisher goes on to explain, "she later returned to Guatemala to learn more about what had happened to her."

In the 1990s, twenty years after dedicated Nancy Drew lovers had discovered Keene's real name and ID'd Mildred Wirt Benson as Drew's creator, Benson donated a series of papers she'd written about her heroine, along with her trusty Underwood typewriter used for creating Nancy, to the Smithsonian where it sits to this day. And finally, the mystery author got public credit in her native Iowa in 1993 when the University of Iowa had a Nancy Drew Conference. That same year, she was named Person of the Week by ABC's Peter Jennings.

Asked later if she would ever give up writing, Benson said, "The undertaker will have to pry me away from my typewriter." That's pretty much what happened. At 96, in 2002, she was sitting at her trusty Underwood when she died. 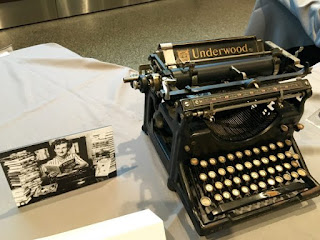 Posted by Jeanine Kitchel at 12:03 PM