B. TRAVEN—AUTHOR AND MAN OF MYSTERY 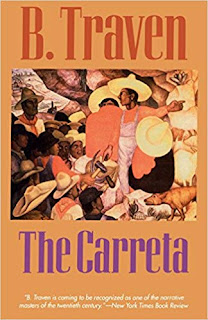 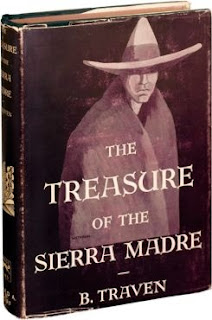 B. Traven was long a cult figure by the time I stumbled onto his legendary adventure novels about Mexico when I traveled the gringo trail in the 70s. It seemed everyone on the road in those days had a copy of The Treasure of the Sierra Madre stuffed into their backpack alongside a Spanish-English phrase book.

B. Traven’s books were required reading for anyone traveling south. Most of his novels, written between 1926 and 1952, were set in Mexico. His themes paralleled what was happening in that country during those traumatic, revolutionary times.

The tales were part adventure, part historical fact, couched in fiction, all taking place south of the border in a very different land. Secondly, his Mexico was a place where abandoned gold mines and bandits still existed. His Mexico was peppered with anarchy and rebellion. His Mexico had spice.

Best known to American audiences because of the film The Treasure of the Sierra Madre, Traven most likely would have remained unknown if John Huston hadn’t turned the iconic greed and gold novel into a silver screen classic starring Humphrey Bogart as down-on-his-luck prospector Fred C. Dobbs.  Two scenes come to mind:  Bogart going mad, and the other sports one of cinema’s immortal lines, shouted by bandits on horseback imitating federales, “Badges? We don’t need no stinkin’ badges!”

By the 1930s, Traven’s work was published everywhere else in the world but England and the US, in dozens of languages, but not a word in English until Alfred Knopf republished The Treasure of the Sierra Madre in 1935. His body of work wasn’t published in the US until the 60s. Today, Traven’s books have been translated into 30 languages, sold more than 25 million copies, and are required reading in Mexico’s schools.

Because he lived in Mexico 35 years, Traven’s work evolves the grit and reality of Mexico: He watched his adopted country adapt to a string of dictators and revolutions. His tales dish out depth and emotion, with a sizeable serving of the oppression of the lower classes thrown in.

His epics read as though inspired by stories he could have heard while sitting in some outback cantina in a dusty pueblo anywhere in Mexico; or maybe he drew on his own slices of Mexican life that occurred while living there till his death in 1969. Or his supposed death . . .

At this point, I must explain that B. Traven was as much a character as those he created in his novels.  The jury is still out on his true identity. B. Traven was a pen name. At a Traven conference just 20 years ago at Penn State, scholars still debated what the “B” stood for, and if his nationality was German, English or American.

Traven’s biographers consider several possible identities: Either he was born in Chicago in 1890, to Swedish parents, and spent his youth in Germany where he started writing anarchist literature under the pen name Ret Marut, moving to Mexico in the 20s. Or he was Otto Feige, born to a German pottery worker.  After traveling widely in his youth, he worked as a manual laborer and actor, and then edited an anarchist journal in Germany before heading to Mexico. In the most recent scenario, presented by professor Michael L. Baumann, Traven was neither Marut nor Feige.  Baumann suggests, in his 1997 book, Mr. Traven, I Presume, that Traven could have usurped the real Traven’s identity and continued on with this man’s work, since his German published books were written in two distinct handwritings and full of “Americanisms.” Baumann also asserts that given what background was known of Traven, he should have been a much older man than the corpse claimed to be his after his 1969 death in Mexico.

In his biography, John Huston adds another question mark to the Traven identity search. While filming The Treasure of the Sierra Madre, Huston invited the author to come to the set, but he declined, sending instead his “agent,” Hal Croves.

“Croves,” Huston wrote, “was a small, thin man with a long nose,” and carried a letter for the director explaining that Traven could not show up; Croves would answer all pertinent questions. “He had a slight accent. It didn’t sound German but certainly European.  I thought he might very well be Traven but out of delicacy, I didn’t ask.”

It wasn’t until Traven’s death in 1969 when a photo of the author was published that Huston confirmed Croves was, in fact, B. Traven.
On Mexican government immigration documents from the 1930s, Traven claimed to have entered Mexico through Ciudad Juarez in 1914.  He settled first in either Tampico or Chiapas—there are mixed accounts on this—writing stories he sent to German publishers under the name B. Traven.  His first published book was The Death Ship, a story of an American sailor who loses his birth certificate and with it his identity and is forced to take a job shoveling coal on a ship destined to go down for insurance money.

THE WRITER’S WORK
According to one biography, Traven wrote about social justice, cruelty, and greed from the very beginning.  In the 1930s he moved near Acapulco. Around this time his books were banned by the Nazis.  Between 1931 and 1940 he published six of his Mahogany, or Jungle, Series, which included:  The Carreta,  Government, March to Monteria, Trozas, The Rebellion of the Hanged and General from the Jungle.

These books chronicled the Mexican Revolution between 1910-1912 and lamented the plight of the indigenous people of Chiapas who worked like slaves in the mahogany forests. In Rebellion of the Hanged, he tells how one man is duped into working in the monteria where mahogany is harvested when his wife becomes ill. Before it’s over, the man’s wife has died but the he has signed a contract with the mill—a deal with the devil.  His struggle to stay alive in hellish conditions is duly recorded in Traven’s prose.
Upon Traven’s death in 1969 his ashes were scattered over Rio Jatate in Chiapas, and his widow, (translator Rosa Elena Lujan) was instructed to reveal that B. Traven was in fact Traven Torsvan Croves, born in Chicago in 1890 and naturalized as a Mexican citizen in 1951. However, in a later interview with The New York Times in 1990, his widow stated Traven told her he had been Ret Marut but she could tell no one until after his death due to his fear of extradition to Germany for his anarchist leanings.

Traven’s true identity is not important. He said so himself. But in reading his novels about a very real Mexico, truths are uncovered through his gripping adventure tales.  The original anarchist, it’s easy to see why he was so embraced by the 60s generation.

Who was B. Traven? As he said himself, “My life belongs to me—only my books belong to the public.”  According to his widow, he said, “I am freer than anyone else, free to choose the parents I want, the country I want, the age I want.”

No matter who the real B. Traven was, his works—still relevant decades after publication—speak for the man behind the mystery. 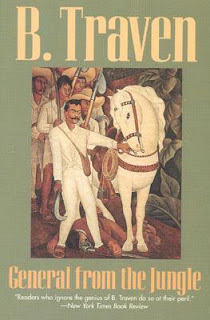