“Only liars and damn fools say they like the jungle.”  Anonymous Yucatan Explorer

While I sat in our little bookstore Alma Libre Libros in Puerto Morelos, Mexico, in those early years when there was barely a tourist to be found, I had plenty of time to read about the Maya civilization and the explorers who stumbled onto their majestic pyramids. We sat within 100 miles of four major Maya sites, and I had become addicted to the Maya. I began compiling notes on the early explorers and their adventures, and at the time thought I’d write a book called Explorers of the Yucatan, but that idea was shelved. Now, finding those notes I realize how much I enjoyed the adventure of reading about their adventures. So this is Part One of that series. I’m beginning with my favorite explorer, Sylvanus Morley. 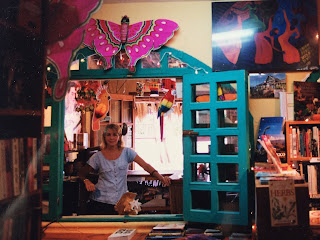 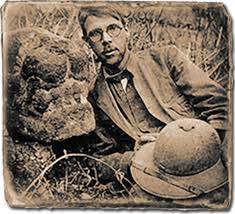 Since 1839 adventurers, explorers and archeologists have attempted to unveil the mystery of the Maya and their pyramids.  Although each of these mavericks deserves a stellae in the Maya hall of fame, rising to the top like Venus on a new moon is Sylvanus Griswold Morley.

Morley began his studies in civil engineering and then attended Harvard where he developed an interest in archeology. Harvard’s Peabody Museum had recently received Edward H. Thompson’s treasure trove of artifacts after he famously dredged the sacred well at Chichén Itzá in 1904. This ignited Morley’s interest in ancient civilizations.

His degree along with his involvement in antiquities first took him to Santa Fe, New Mexico, where he cut his teeth on researching and exploring Native American cultures. Morley’s influence in Santa Fe was so great that later on, he and a group of his contemporaries, including Georgia O’Keefe, would define what has come to be known as the “Santa Fe” style of architecture.

Between 1909 and 1914 Morley did field work in Central America and Mexico for the School of American Archeology.  During this period his early archeological expeditions were used as a cover for espionage activities for U.S. Naval Intelligence during World War I.  According to one source, although his wartime activities have been largely forgotten, he laid the groundwork for modern U.S. intelligence efforts.

After the war, Morley became a research associate for the Carnegie Institution where he applied for the position to head up explorations in Southern Mexico, Guatemala and Honduras.  In 1915, he presented a proposal for funding a restoration project at Chichén Itzá.

Morley’s proposal was a 20-year plan to restore Chichén Itzá, now one of the New Seven Wonders of the Modern World, to its former grandeur and to invite tourists to become a part of that mix. He chose Chichén Itzá because it was close to Merida and easy to reach, thanks to progressive governor Felipe Carrillo Puerto’s efforts at building a new road that connected Merida with the soon to be famous site.

Before Morley’s excavation, Chichén Itzá was merely clumps of grassy mounds as was common with all Maya sites in the early days of exploration. Morley would labor at excavation there for 18 years, until 1940.  Shortly after his work was complete, he published The Ancient Maya in 1946, the first comprehensive account of the Maya civilization.

The rain forest held no glamour for Morley, nor did spending the night in a flea-infested palapa, eating canned goods, fighting insects, fearing snakes, taking water from a filthy water bag, nor running the risk of contracting serious tropical infections. Nicknamed the little hummingbird by Native Americans on one of his first expeditions to the southwest, Morley always dressed the part of the archeologist, looking more like Bill Gates than Harrison Ford, complete with pith helmet.

He said he hated the jungle because he dearly enjoyed the comforts of civilization. But even the ill health that plagued him over the years in no way diminished his enthusiasm for advancing the knowledge of the Maya. His biography by Robert Brunhouse details how, at every turn, his good health was sabotaged by numerous illnesses. Seasickness seized him on entering a boat; he contracted malaria in the early years of his explorations, threw it off for several decades, only to contract it again. He suffered from colitis in 1924 and was continuously in and out of hospitals for tests.

The following year amoebic dysentery forced him to leave Chichén Itzá and spend weeks in a New Orleans hospital. On returning to the site, he felt his energy was too great for his emaciated 109-pound body and was quoted as saying he had a Rolls Royce engine in a Ford Motor body. 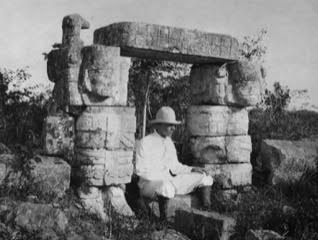 After he had established himself at Chichén Itzá, Maya leaders asked him to help convince Queen Victoria to form an alliance with the Maya to drive the Mexicans out of Yucatán once and for all.  (This was before the final truce had been signed for the Caste War of Yucatán which lasted nearly one hundred years). After explaining that Queen Victoria was long dead, he became the unofficial spokesman for the Yucatec Maya from 1923 until his death in 1948.

Inauguration of the Chichén Itzá project was his greatest contribution to Mesoamerica archeology. Financed fully by the Carnegie Institution, he continued hard at it until 1940. In the 1930s he discovered he had heart trouble but continued to travel, now by plane rather than mule or boat. His overall emphasis soon expanded into a vast multi-disciplinary study of the entire Maya area.  At Chichén Itzá, his work opened a new chapter in the history of archeology. On completion of the project in 1940, when he departed, he said he would never return and he never did. But his love affair with the Maya culture lasted a lifetime.

He was scholar, explorer, informal diplomat, secret agent, planner, author and educator.  His explorations and excavations put the Maya and Chichén Itzá on the map. 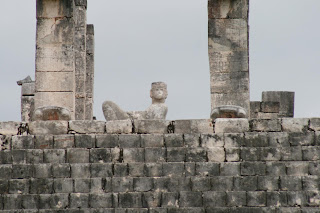 Posted by Jeanine Kitchel at 10:31 AM