WHO WERE THE ANCIENT MAYA? 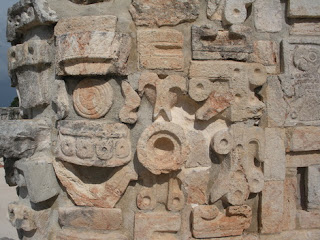 Were they pyramid builders? Astronomers? Lords of the jungle? High priests and shaman? Mathematicians?
After years of studying the Maya, I believe—aside from those glorious pyramids— they’ll most be remembered for their stargazing abilities. The Maya were called naked-eye astronomers.
Say what?

STARGAZERS AND MATHEMATICIANS
The Maya were stargazers for a reason. First and foremost they were mathematicians who painstakingly followed and kept detailed records on the position of the stars and planets day by day, year by year, century by century. Without the use of anything other than the naked eye, they recorded these precise calculations for more than a millennium. They kept track of the night sky in paper-bark books called codices. (Sadly, all but three were burned by Spanish priests in an effort to purge the Maya of their “pagan” beliefs). And through this precise nightly recording of the sky’s movements, they were able to simulate what we today can do in the blink of an eye with a telescope. The Maya viewed the Milky Way as the world tree, their Ceiba. The Ceiba was considered the Maya tree of life—the tree that holds up the world.
THE MILKY WAY

But to the Maya, the Milky Way was more than that familiar smudge across the sky we see each night. The Milky Way was also the Sac-be or road to the underworld for dead souls as well as the path for those souls to the sky. It was their River Styx. Without the Milky Way, dead souls couldn’t find their way and would be caught in a forever limbo.

So Maya astronomers were left with the weighty job of deciphering how each star and planet would align. It was their destiny to forever record the nightly movement of the stars so that those departed could find their way to the underworld.
PAKAL'S TOMB

Even though all but three of their paper-bark books were destroyed, additional proof in this theory of the Milky Way and the world tree’s importance is carved onto the glorious sarcophagus lid of Pakal, Palenque’s greatest ruler.If you've never been to Palenque, go. To me, it is the most spiritual and mystical pyramid site, off the beaten track and not an easy journey. But once there, it’s like Hawaii with pyramids in a lush jungle setting with a smattering of near Asian style structures. The Asian influence makes one wonder. But back to the sarcophagus lid—it shows the king descending down the world tree into the jaws of the underworld, or Xibalba, to his death. Descending the stairs to Pakal’s musty tomb is a journey in itself. And as an aside, Pakal’s tomb was discovered by accident in 1952 by famous archaeologist Alberto Ruz when a worker noticed holes in a floor slab. When lifted, it showed a stairway filled with rubble that took three years to clear. But Pakal’s tomb, and the discovery of the king’s bejewelled death mask, made those efforts worthwhile.
Palenque was also the site of the famous Palenque Roundtable in the mid-1970s where more than twenty of the world’s foremost archaeologists came together and broke the Maya code.  At that meeting, they deemed that the greatest portal to the underworld was found in the night sky, and it related back to the Maya creation myth. Now having the ability to read the Maya stelae (carved concrete like slabs placed in front of every pyramid), these archaeologists decided the myth portrayed the Milky Way, as a tree, to be the centre of their universe, dating back to their creation myth in the Popul Vuh.
Have I lost you yet?
VENUS FOR ACTS OF WAR

But not only did the Maya gaze at the stars so that they and their rulers could find the starry path to the underworld, They monitored the planet Venus to decide when to make war on fellow Maya city-states, and when to plant their crops, specifically maize.
So determined were the Maya to follow this star-earth continuum that many pyramid sites, such as Chichen Itza’s Temple of Kukulkan, are aligned to certain astronomical specifics. Each spring and autumn equinox, the sun casts its shadow onto this Chichen Itza temple due to its place in the heavens, the building’s position, and the Maya’s precise calculations, configured centuries ago, for for this event. The sun’s shadow creates the illusion of the serpent’s body (the temple sports a huge serpent on each of its four corners) slithering down to the base of the staircase, finishing at the serpent’s mouth at ground level. Again, if you’ve not yet been to Chichen Itza, go. Other sites also are clearly aligned with these spectacularly coordinated spectacles, not unlike sunrise at Stonehenge. One wonders, how on earth did they do it? But they did.


So who were the Maya? To me, they will always be stargazers who tamed the night skies long before modern man/woman would have thought it even be possible to do so. Had any more than three of the thousands of paper-bark Maya books burned been saved for posterity, what other wonders would we have discovered? Though they were an early civilization, they were one with extraordinary powers to delineate not only the position of the planets and when full eclipses would occur, but they also created an intricate system of calendars (twenty-eight in all) that, some scholars say, coordinate as accurately as our calendar does today. When the Maya calendars were compared for exactness against a modern day computer, scholars found only a slight difference in accuracy. All done without a slide rule, calculator or telescope.
Naked eye astronomy.
It worked for the Maya. And if this article doesn’t inspire you to go to the nearest pyramid site and stare at in wonder, I have failed to do my job.
Posted by Jeanine Kitchel at 4:47 PM